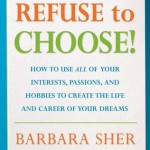 Barbara Sher. Refuse to Choose! A revolutionary program for doing everything that you love. New York: Rodale, 2006.

Why this book?
During her time at college Barbara Sher found out that she wanted to do a large number of courses. Everything was so interesting! Her friends thought she was crazy. She enrolled in ten courses, while others took five or six. For a long time she also couldn’t decide on a major. After finishing college she did a number of various things. She became a writer and later on a coach. She found out that there are more people who want to do a number of different things at the same time. Those people are often curious and intelligent, talented in a number of areas and delve into all kinds of different subjects without any specific purpose. These people are often told by others that they have to choose. Why? They don’t have a problem being involved in different areas, but others are often negative about this. She has started to call these people ‘scanners’. She wants to change the negative image that is often attributed to these people into a positive image and find a way for these people to be happy with how they are. And show them ways to be comfortable and effective in handling this. She wrote this book for people who have trouble choosing. Her advice is the title of the book: Refuse to choose! When you start living your life with this in mind she says that 90% of your problems will disappear.

The book
The book starts by describing what ‘scanners’ are. Sher makes sure to exclude being depressed and having ADD. Scanners are extremely curious and don’t want to specialise in just one subject. They often wonder what is wrong with them. They sometimes have trouble getting started on a project, or maybe finishing the project.
The second part of the book is where Sher describes 11 kinds of scanners and gives a large number of examples.
Throughout the book there are many ‘tools’ and appendix B gives an alphabetic overview of those tools with page references.

Reviewer’s opinion
To me this is a very positive book and I am very happy that Sher recognised these people as having large potential, while others may characterise them as restless, searching and sometimes even give them psychiatric diagnoses. When given this much negative feedback, sometimes starting at a young age, you would almost start to believe in it yourself.
Sher doesn’t specifically call these people gifted, but I can’t help reading this into her words when she talks about ‘multitalented brains’, ‘eager to explore everything’ etc.
This book connects with what gifted people are often told: “Can’t you focus on one thing?”, “Why don’t you just do one thing at the time”, etc. In the book by M.-E. Jacobsen (The Gifted Adult) ten examples are listed of things gifted people are often told, among which “Can’t you just stick with one thing?” These kinds of remarks make you believe that there is something wrong with you. And that stops you from doing anything at all. And makes you lose your enjoyment of what you like to do most: ‘scanning’.
The language of the book has a lot of positive energy and you feel that this woman knows what she’s talking about. She has experienced it herself and coached a large number of people on this subject. The examples she gives of people from her coaching practice are very clear and present a good idea of what scanners are and the kind of quest that Sher goes through with her clients. Together they find very original solutions to issues that seemed impossible to solve earlier on.
Like many American books I find this book a bit lengthy on certain points. The message is clear to me very quickly. The many examples are fun to read and offer more insight, but shorter texts could sometimes make the message even clearer.
The many practical assignments are fun and useful. However, they could be shorter and possibly gathered together in a separate chapter. This would create the idea of a workbook and exercises could be done, but I doubt gifted people have the patience for that.

What does this book mean for gifted adults?
I would recommend this book to gifted adults who have doubts because they don’t stick to one subject, either in jobs, or hobbies etc. This book would allow them to create a more positive self-image and a better way to handle their broad range of interests and talents. The examples from the coachees could give them ideas on how to do everything they want without having to choose.
They could also use the tools that Sher described. That would require some self-discipline.
I think the book can be a useful tool to coaches and other caregivers of gifted adults. The many examples of being a scanner can lead them to recognise it in their clients as well. They can address this issue and also use the tools that Sher describes in the book.
If this book doesn’t work for someone as a self-help book, a professional coach or caregiver is advisable. It’s exactly in these circumstances, when someone suffers from a lot of things in life that don’t work out, when real damage has been done, or a person has been out of work for a long time and maybe has mental complaints, where research and coaching by a psychologist or psychiatrist could be useful.

Noks Nauta, physician and psychologist
Translation of this review into English by Yvonne Veltmaat

Thanks for your excellent review, Noks Nauta.

Incidentally, I agree that exercises are difficult to do. For that reason we designed an online book club for Refuse to Choose (and two of my other books as well.) The Refuse to Choose book club just ended and won’t begin again for a number of months, but it was a great success. There were about 6 groups of 30 people each, going through about a chapter a week for 16 weeks. They had the book and did the exercises listed on their own. Then they came in to comment on what they learned and to share personal stories and have really good conversations.

Most of them seem to have done the exercises and read the whole book, partly because (I think), Scanners rarely know other Scanners, and they are really happy to find people at the book club who understand and are sympathetic. it looks like some of them will be continuing to be friends now that the book club is over.

There are Facebook and LinkedIn pages for Scanners also. I don’t start them. They spring up independently. I also encourage Meetup.com options and there are a number of Scanner clubs in London and other places. Almost no one seems to understand Scanners, so the support and friendship seems to help a great deal.

Another point: In the book I believe I have written that near the end of writing the manuscript I was advised to look at two books about Gifted Adults – the one you mention, and another called ‘Gifted Grownups.’ I also looked up ‘Gifted Adults’ on Google. To my surprise, all three places showed me that gifted adults actually do have many of the same traits as Scanners! I’m sure there’s often a connection. A fast mind needs more entertainment. A deep mind needs something better than shallow entertainment – and Scanners love to learn more than anything else as far as I have seen.

I hope one day there will be more research done on this imortant phenomenon.

In the meantime, thank you once again for your positive review.